Hello from Towne Theatre Corpration!  Great Grandpa  L.C. (Les) Lund and his sweet wife Nada started the theater business when they went in with Huish Theaters and helped finance and construct the Laurel Theater in Fairview. A few years later they also started the Star Theater in Mount Pleasant, Utah in the late 1920’s.

So, after talking pictures started, LC built his own sound system for the “talkies”. Nada drove a school bus and at night she would go to the out-lying towns and pick up the folks who wanted to come to the movies.

LC and Nada’s son Trux grew up in the business and was an operator for many years. He was a painter by day and he painted quite a few of the advertisements and signs around town.  Trux and his wife Helen went in with some family members and then bought them out in the 1960’s, thus acquiring the Towne Theatre in Ephraim.

In the 1930’s the Star Theater in Mount Pleasant changed its name to the Kinema because kids would say “Can I go to the movie Ma? Can I Ma?”.  In the 1940’s the Laurel closed so they only had the one theater in Mt. Pleasant for a while. Nada and a cousin Richard and Trux ranthe Drive-In and the Kinema. In the winter they ran the Kinema and then in the summer they would take some of the equipment to the drive-in and run it, so the Kinema would close.  In 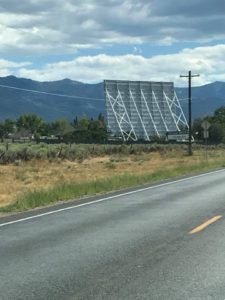 1960 Trux went to the Uintah Basin and purchased the drive-in screen and all the equipment and re-assembled it all where it is today.  Hence the name.  The Kinema ran until the mid 1980’s and remained closed until it burned down.

Rod and Judy Anderson bought the business in 1981 form Judy’s mom and dad. Judy always worked at the Theater in Mt. Pleasant.  She started when she was about 6 and only left for the 10 or so years when she lived in Bountiful, Utah.

Nada lived in an apartment above the Kinema theater for many years. 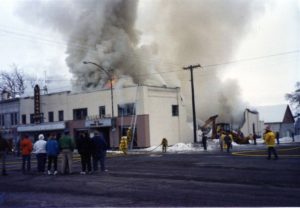 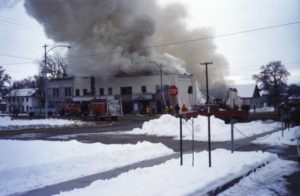 In 1985 a sad thing happened, there was a fire in the Queen City Ballroom and the theater and the mortuary next door all had to be torn down because the structures were all tied together.  They were located where Wheelers Drive-In is now located.

Mount Pleasant had a different look after all of that.  Today, without a good story about why things look the way that they do, you would never know that things looked different several years ago.

In 1999 Rod and Judie started construction on the SouthTowne Theatre and as a result, Matt and Molly Anderson moved to Mt. Pleasant to assist in building the new theater and in maintaining all of them as well. In 2004 Matt and Molly purchased the business from Matt’s parents and they are the current owners.